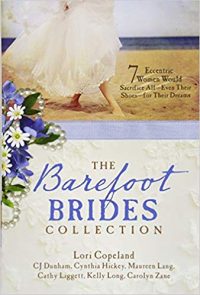 Connected to nature and carefree of heart seven historical women would prefer to travel through life without shoes, especially if giving away their only pair would comfort someone else in need. Will these women of faith change their ways under society’s pressures and the lure of romance?

Barefoot Hearts by Lori Copeland
Edgar’s Cove, Arkansas, 1876
Annie Lawson was perfectly content with her life on the banks of the muddy Mississippi—or so she thought until the man of her dreams, Doctor Gabe Jones, agreed to temporarily fill a void in Edgar’s Cove—but it turned out the void was in Annie’s heart. Could a simple baseball score decide the answer to a lifetime dream?

Castles in the Sand by CJ Dunham
Victoria, Vancouver Island, 1899
Carefree Jennie Farrow befriends an orphaned baby seal and a crusty old fisherman. When the seal brings gifts from the sea, they recognize something from a missing boat and set out to find the wreck. A man found on a beach has no memory, and Jennie helps to nurse him back to health. But what will become of a budding love when his wealthy family come and whisk him away?

A Teacher’s Heart by Cynthia Hickey
Ozark Mountains, 1932
Small Town teacher Mary Jo Stevens yearns to make a difference in her community. As a Demonstration Agent for the Arkansas Welfare Department, Bill Wright travels to every hill and hollow in the Ozarks to teach men and women how to make the best of their situations. But he needs the assistance of someone like Mary Jo. Can she trust an outsider who thinks he knows best?

Between the Moments by Maureen Lang
Kansas, 1879
Everyone in town knows Eddie Tucker who lived with the Apache for seven years as a child and now keeps to himself—until Mary Elliot arrives in town. As the daughter of missionaries, Mary rejects her grandfather’s wealth, preferring to spend time with the poor. The two outsiders have much in common, but will Mary’s family and Eddie’s deep wounds keep them apart?

Promise Me Sunday by Cathy Liggett
Boston, 1890
Adeline McClain’s mother always preached “to thine own self be true.” But when Adeline is orphaned and brought East to live with well-to-do relatives, being herself—caring, down-to-earth, and often barefoot—is getting her into trouble. When it comes to love, could Adeline’s eccentricities cause Everett Brighton to have to choose between Adeline or his inheritance?

Lady Slipper by Kelly Long
Pennsylvanian Appalachia, 1922
Local resident Fern Summerson agrees to help a young missionary distribute shoes to her people, but the journey becomes fraught with tension as Jacob Reynold falls in love with his guide and discovers that her connection with nature is more beautiful than any well shod foot.

Hope’s Horizon by Carolyn Zane
Oregon Trail, 1843
Hope Dawson agrees to become engaged to an older man in order to relieve her family of one more mouth to feed. But on the Trail, she is forced to walk while Julius and his mother ride in the wagon. Fellow traveler, William Bradshaw sees her plight, but can he help without losing his heart?

Available at the following retailers: 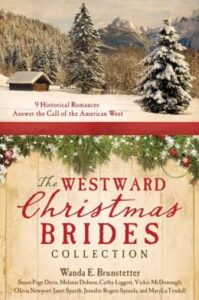